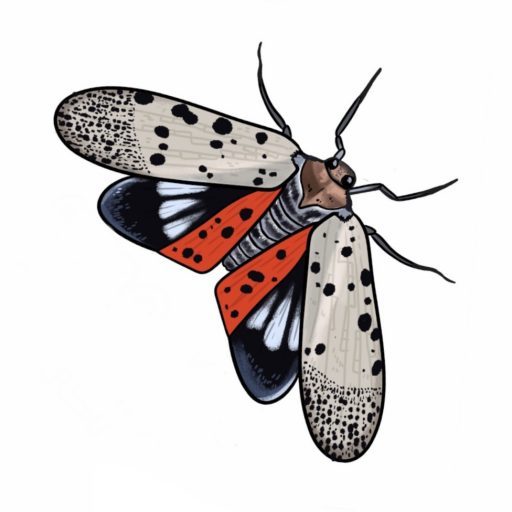 The Spotted Lanternfly (Lycorma delicatula) is native to China and was first detected in Pennsylvania in September 2014. Spotted lanternfly feeds on a wide range of fruit, ornamental and woody trees, with tree-of-heaven being one of the preferred hosts. Spotted lanternflies are invasive and can be transported long distances by people who move infested material or items containing egg masses. If allowed to spread throughout the United States, this pest could seriously impact the country’s grape, orchard, and logging industries.

The name “lanternfly” is misleading; spotted lanternflies have little in common with any type of actual fly. Another misconception arises when viewing adults with wings spread, making them look like moths. Spotted lanternflies are plant-hoppers in the order Hemiptera, or true bugs, and are closely related to cicadas, brown marmorated stink bugs, aphids and leafhoppers. All insects in this order have piercing-sucking mouthparts which allow them to drill into the phloem of a plant to feed directly on the sugary sap.

Where Did They Come From?

Native to parts of Asia including China, Vietnam, Bangladesh and South Korea, the Spotted Lanternfly is an invasive plant-hopper (a type of insect) in the U.S. It was first discovered in Berks County, PA in 2014 — however it is thought that it was actually introduced in 2012 as evidence suggests from older egg casings discovered.

The Spotted Lanternfly is well known to devour well over 70 species of woody plants and trees including grape, apple, maple, birch, sycamore, willow, staghorn sumac, and more. Studies have shown that younger nymphs tend to feed on a wider range of plants than adults. Adult Lanternflies have been shown to prefer an invasive tree which was brought over from Asia; the Tree of Heaven (Ailanthus altissima) as well as Black Walnut trees (Juglans nigra) and hops.

When Lanternflies feed, they excrete a sugary substance called “honeydew” which can attract bees, wasps, and other insects. The honeydew also builds up and promotes the growth for sooty mold (a type of fungus), which can quickly cover the plant, forest understories, patio furniture, cars, and anything else found below feeding Lanternflies.

The Spotted Lanternfly has piercing-sucking mouthparts that are adapted to feeding from plant stems. The mouthparts are located under the front portion of the head capsule and consist of a cone shaped and a tubular labrum (upper lip). There is a deep longitudinal groove along the dorsal surface containing the stylet fascicle (cylindrical mouthpart used to pierce the surface of the plant to feed). Like all other hemipterans, the stylet fascicle is comprised of four parts, two mandibular and two maxillary stylets. The size of the mouthparts correlates to body size.

The average lifespan of a Spotted Lanternfly is actually only 7 to 10 days, and during its short life, this insect goes through several significant changes. In the current infestations, the Spotted Lanternfly has been shown to typically have just one generation per year, consisting of four nymphal stages (3 early and 1 late), an adult stage, and overwintering as egg masses. Being true insects, spotted lanternflies molt to progress between stages.

Beginning in September, female Lanternflies begin to lay one or two batches of eggs. Each batch may contain anywhere between 30 to 50 eggs (sometimes over 100) which are deposited in rows, which are then covered by secretion from her body which looks very mud-like. Over time, this waxy covering dries up and may begin to crack (which is normal). Occasionally, the female may not cover all eggs with the secretion.

Eggs may hatch over an extended period of time, with the first instar nymphs appearing in May and June. Mating takes place starting in late August with egg-laying taking place in September through November or until the first killing freeze.

The native range of the Spotted Lanternfly (Lycorma delicatula) includes China, India, and Vietnam, and was first reported outside these countries — in South Korea — in 1932. Since then, these pests have spread into a number of new geographical locations; essentially any place where it could thrive. In the U.S., it has been found in Pennsylvania (where it was first discovered), Delaware, New Jersey, New York, and Virginia, but its wide range of host plants on which it feeds makes it highly likely (and quite easy) to establish a wider distribution.